A little more than a year after opening its doors, Old 4th Distillery is making a big expansion move. Atlanta’s first legal distillery in more than a century has closed on a 15,000-square-foot building at 536 Decatur Street, which will house manufacturing, office space, and room for events. 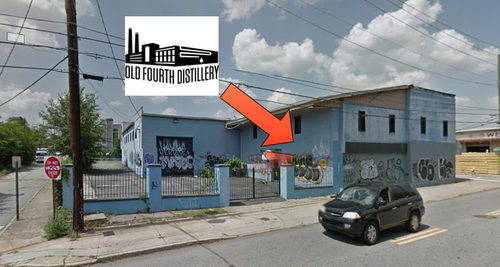 “What we are doing right now is preparing for the next two-and-a-half, three years on manufacturing capabilities,” O4D co-founder Jeff Moore said in a Wednesday phone conversation with Eater Atlanta. “Our existing facility right now, our manufacturing area is about 1,100, 1,200 square feet, so we’re in a very, very small facility. Our capabilities right now, if we really push the envelope, then we’re probably at about six, 700 cases on the vodka and probably that same amount on the gin.

“Our feeling is that in order to really keep up with demands — we’re hoping — over the next seven, eight years is to start thinking about a new facility now.”

The distillery produced only vodka for its first year of existence, its gin hit package store shelves last week, and bourbon is on track for a 2019 release. With the huge jump in added space — the new facility is roughly 10 times bigger than O4D’s current home — there will be ample room for anticipated staff additions, larger events such as wedding receptions, and classes on professional distilling. The business will continue to operate out of its space at 487 Edgewood Avenue SE, which will be the headquarters for gin production and allow for some experimental distilling.

Tours run at the following times:

Walk-ins are welcome, or book your tour online.

Are you at least 21 years old?